The nuptials were an intimate occasion which their nearest and dearest promised to keep off social media however new images have now shown the incredible details of their stunning day.

While exchanging their vows in the ceremony, Danielle sported her frothy mermaid hem dress which boasted a cupped, strapless top which helped highlight her tiny waist and svelte arms.

Teasing her brunette tresses into coiffed waves falling over one-shoulder, she pinned back one side of her locks with an elaborate and luxurious pearl hair slide.

Michael went for a mostly-conventional look with a black suit paired with an open-neck white shirt however he changed things up by sporting trainers during the most important moments of his life. 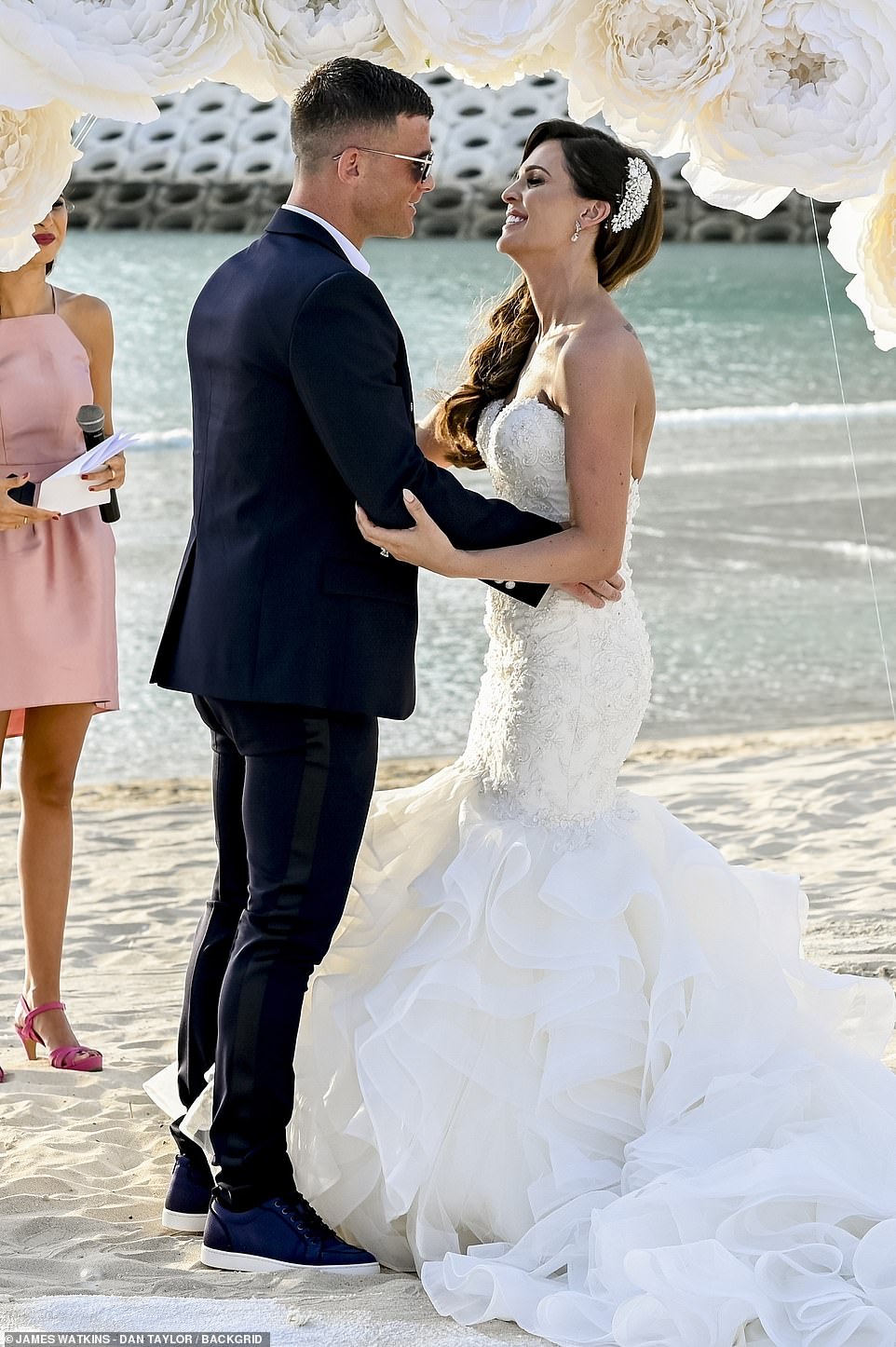 Just the two of us: Following the idyllic ceremony and reception, MailOnline has obtained an exclusive glimpse into the couple’s incredible nuptials, which saw the duo exchange vows under an incredible flower arch and on the sun-drenched beach

Stunning: She alternated between a heavily beaded evening dress and her original frothy gown 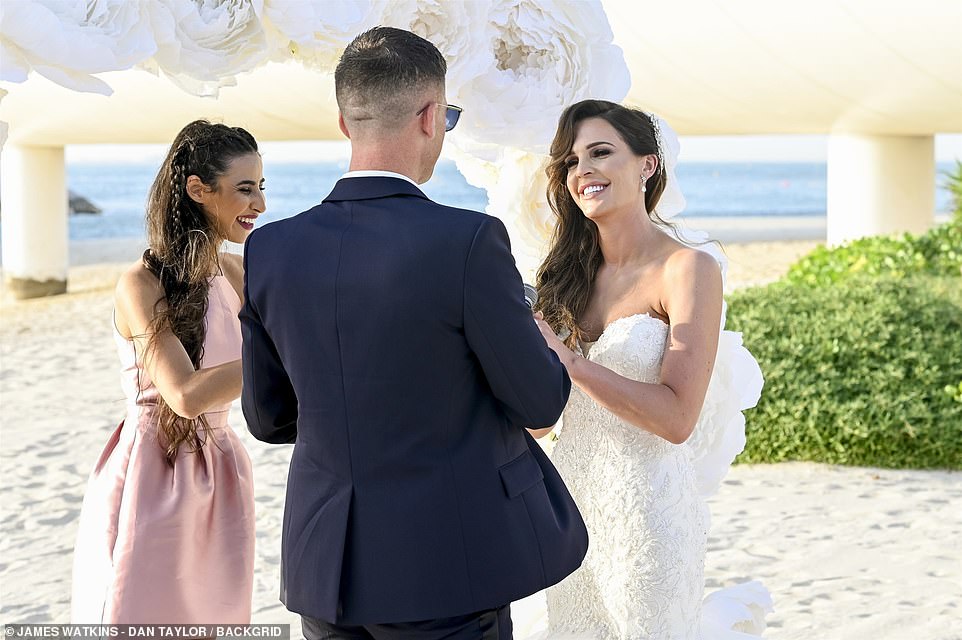 Happy days: Following the idyllic ceremony and reception, MailOnline has obtained an exclusive glimpse into the couple’s incredible nuptials and the fun-filled after party which saw the pair party into the wee hours 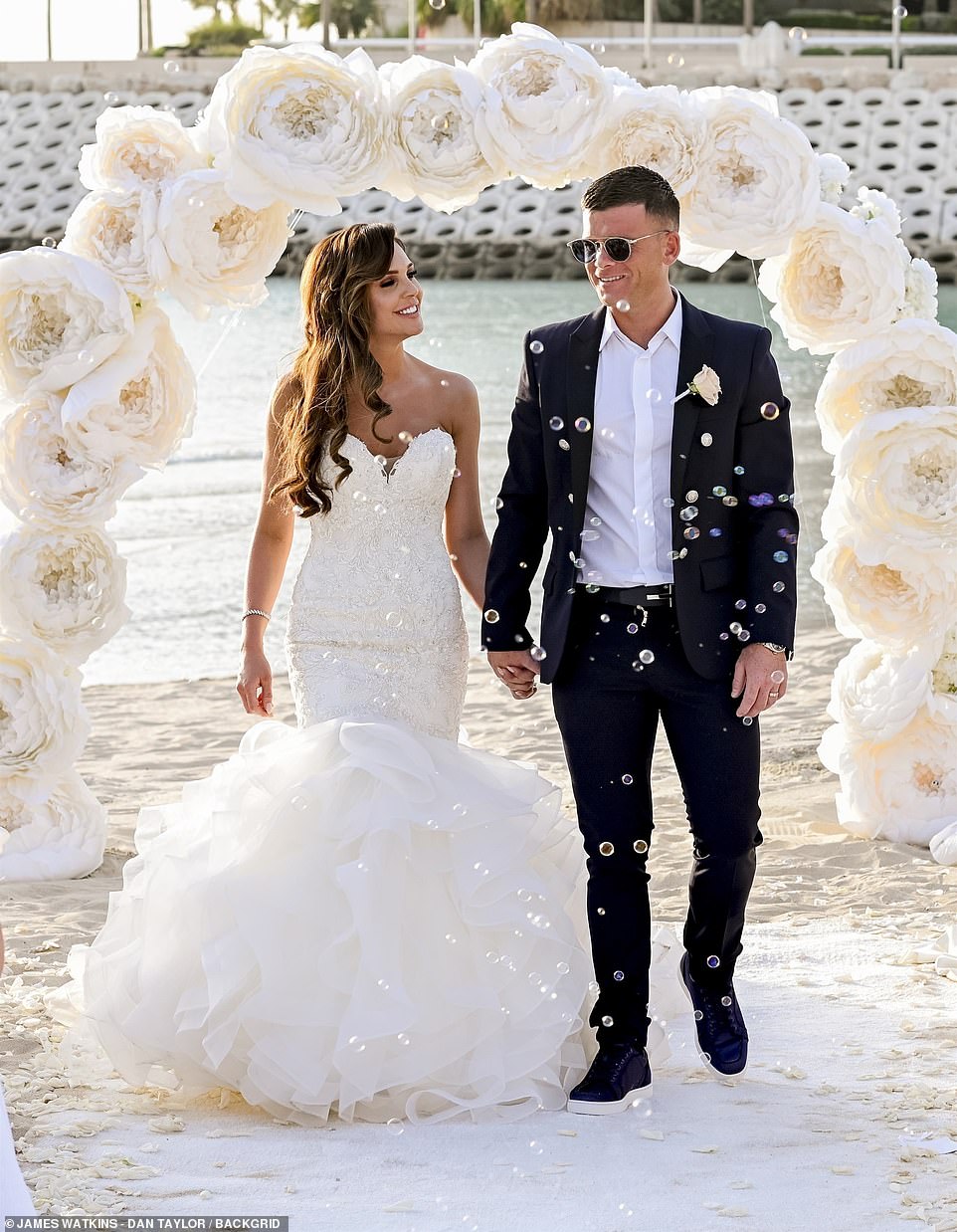 Her love: The couple had to delay their wedding after Danielle became pregnant with their first child together, Ronnie, who was born in September 2017. 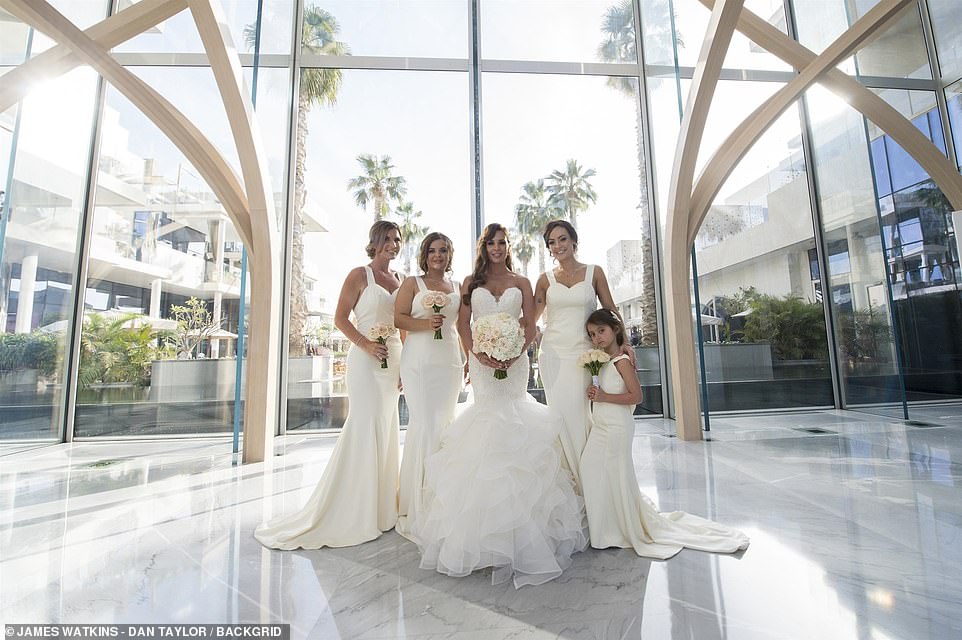 The money shot: The intimate ceremony was jam-packed with their love ones 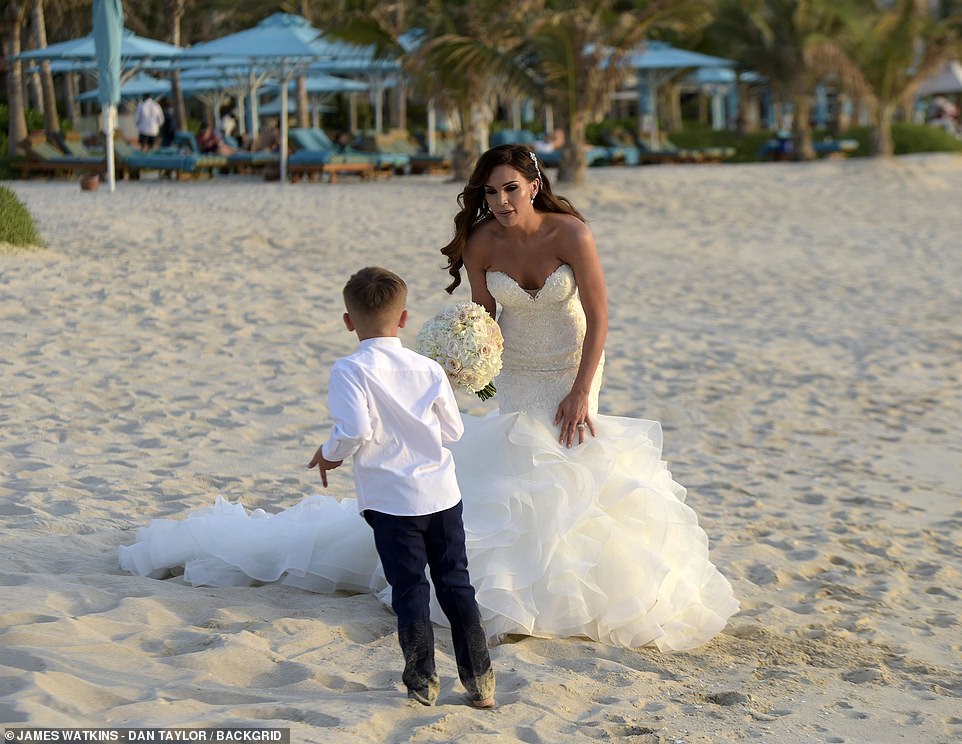 Larking around: She was playing with her boys in the sand while rocking her dress 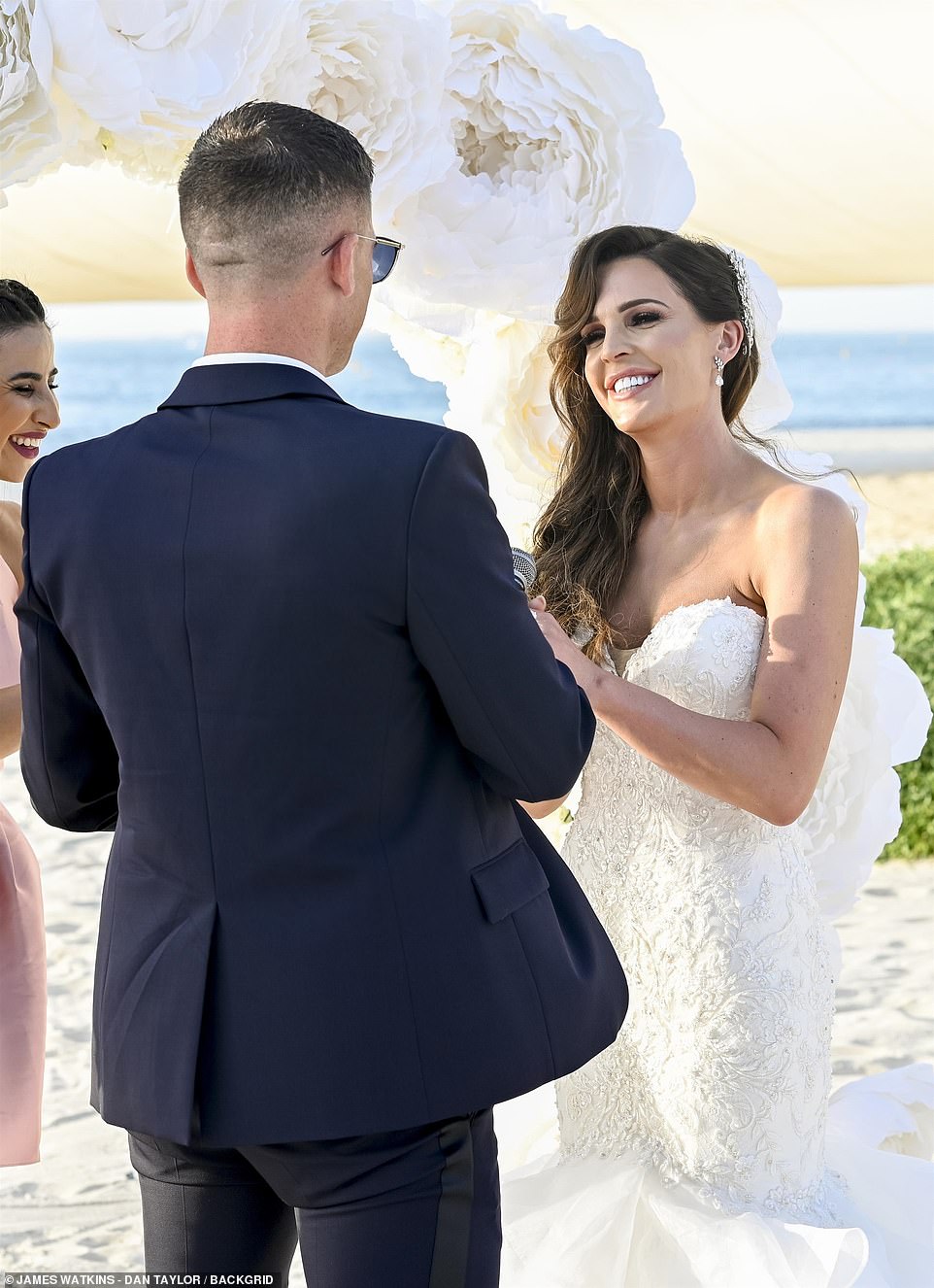 Joy of joys: The happy couple were beaming from ear-to-ear as they officially professed their love for one another 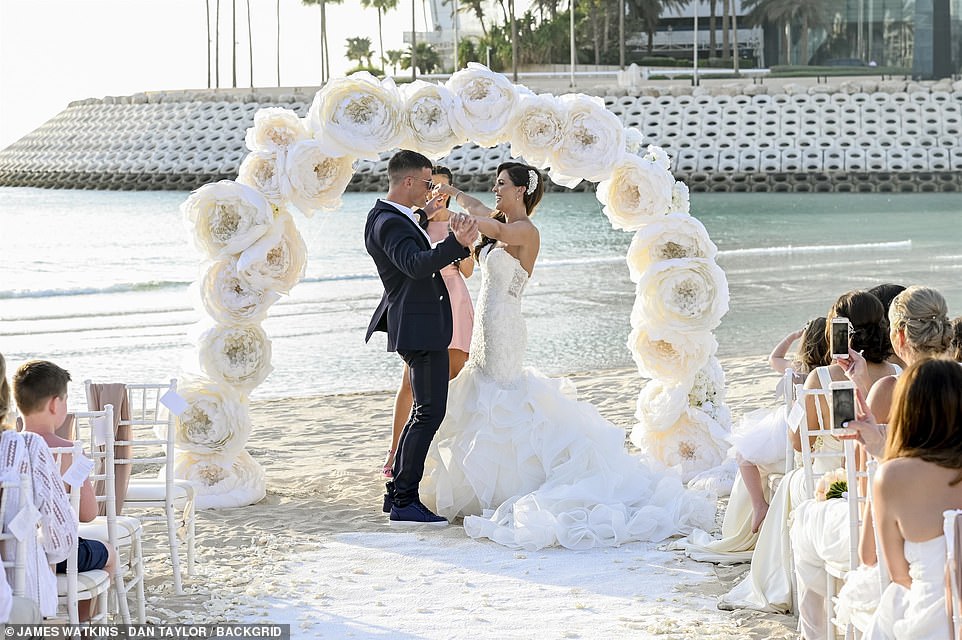 Say yes to the best! The couple were giddy with delight as they rang in their big moment with joy 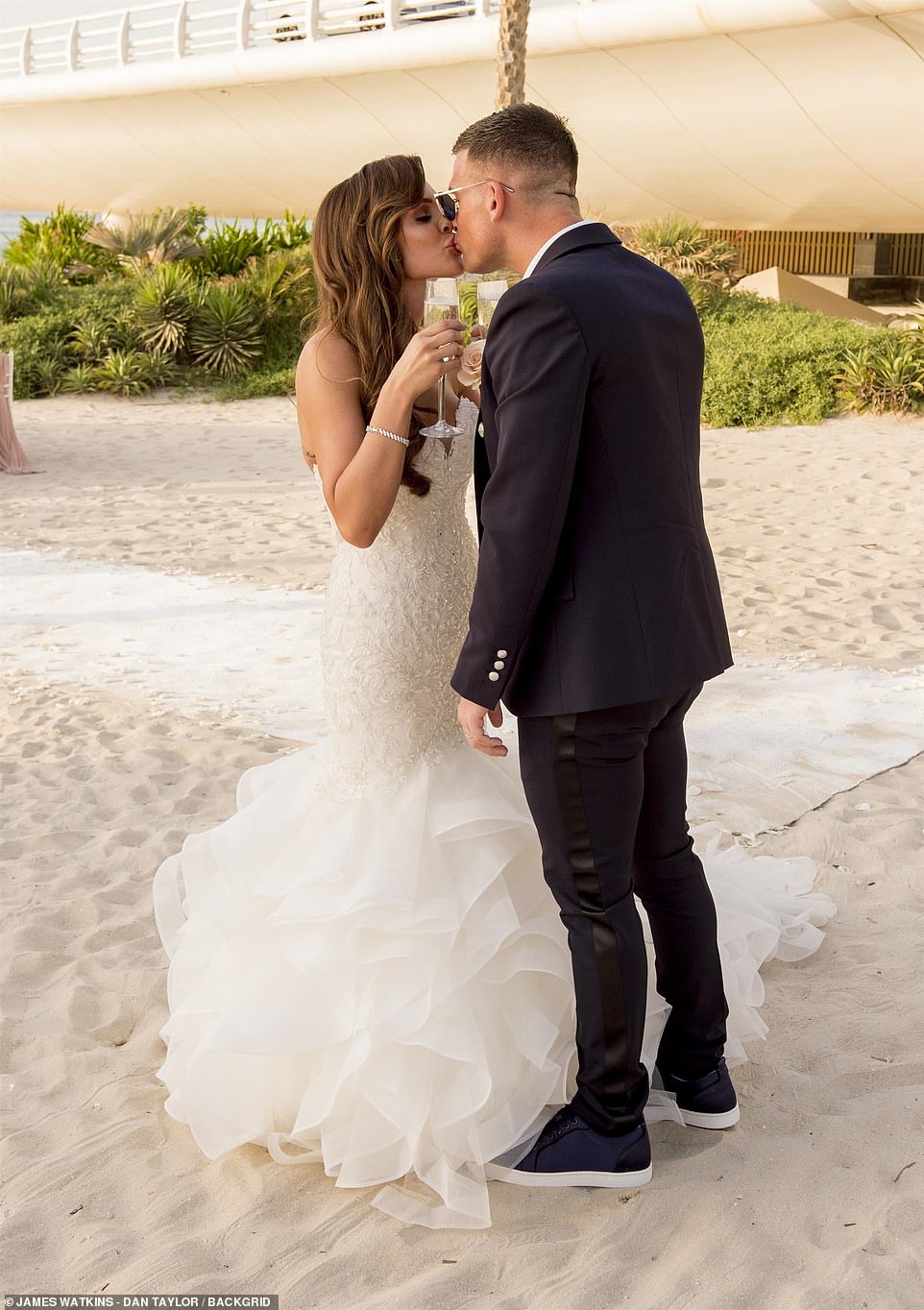 Unconventional: Michael went for a mostly-conventional look with a navy Balmain suit paired with an open-neck white shirt however he changed things up by sporting trainers during the most important moments of his life 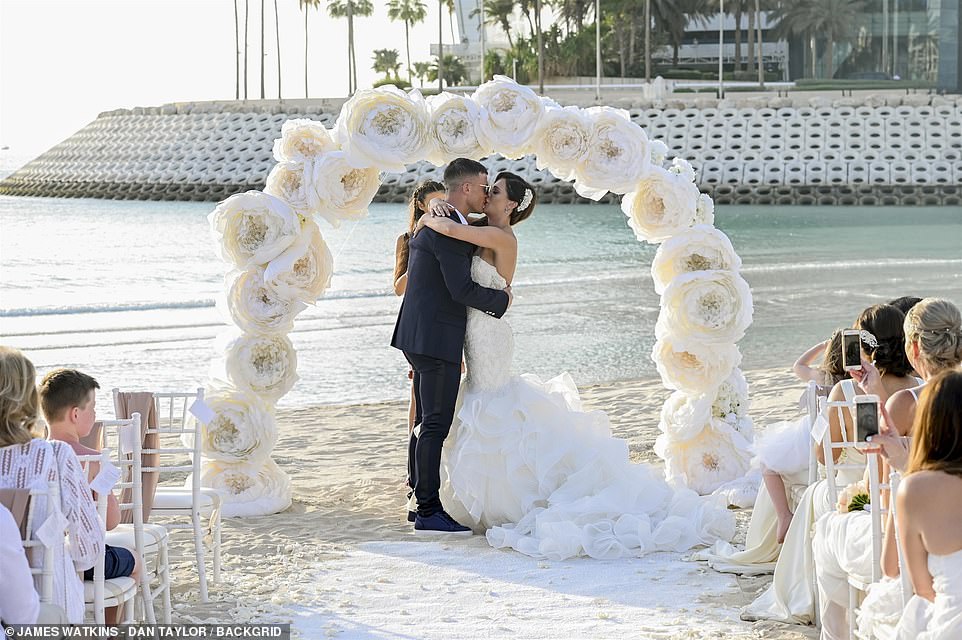 Introducing Mr and Mrs O’Neill! The couple were overjoyed as they celebrated their nuptials 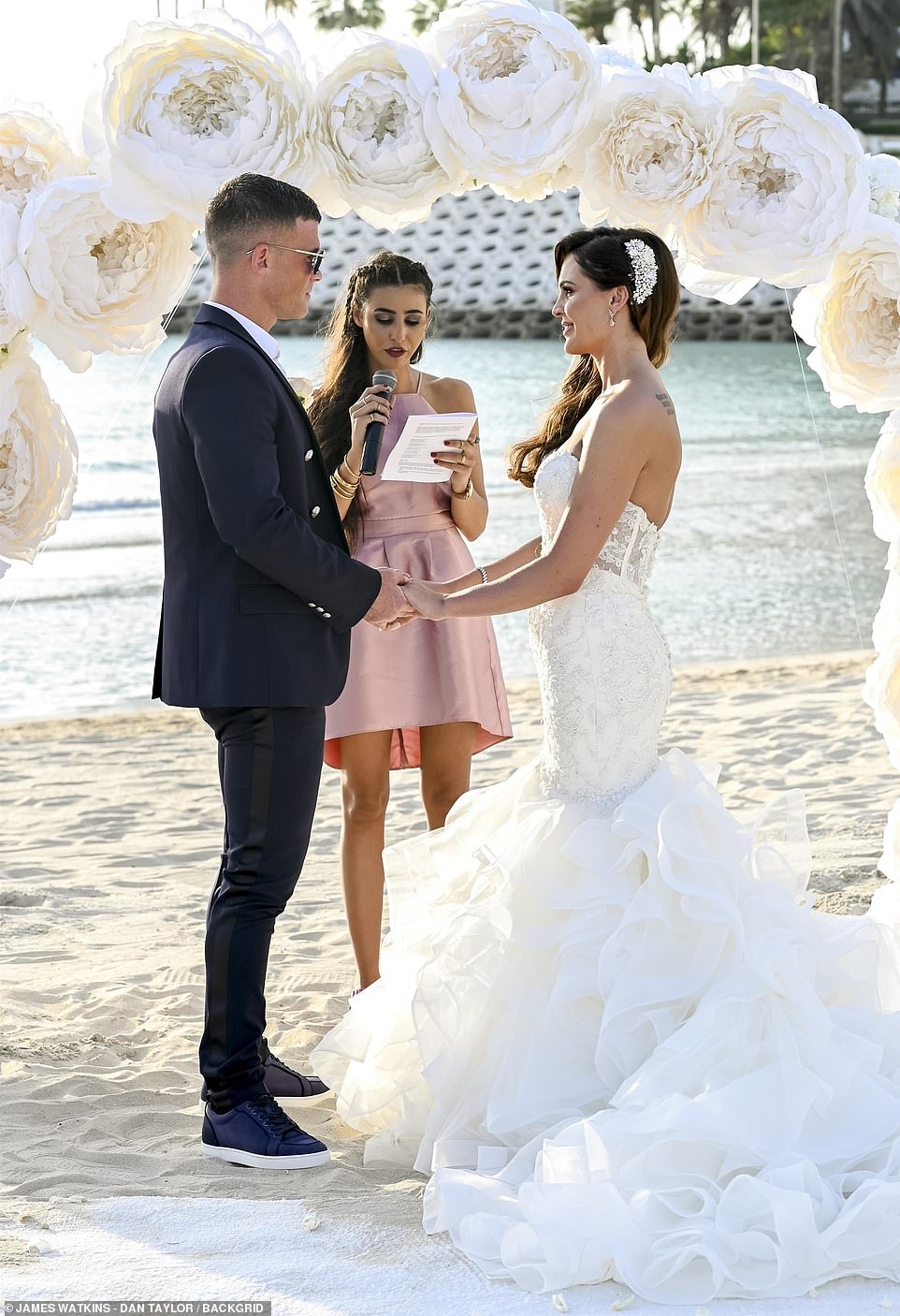 I just called to say I love you: They held each other close during the romantic ceremony

We are family: Danielle and Michael posed with Archie, George and Harry James, the sons she shares with ex Jamie O’Hara, and their own baby Ronnie, two 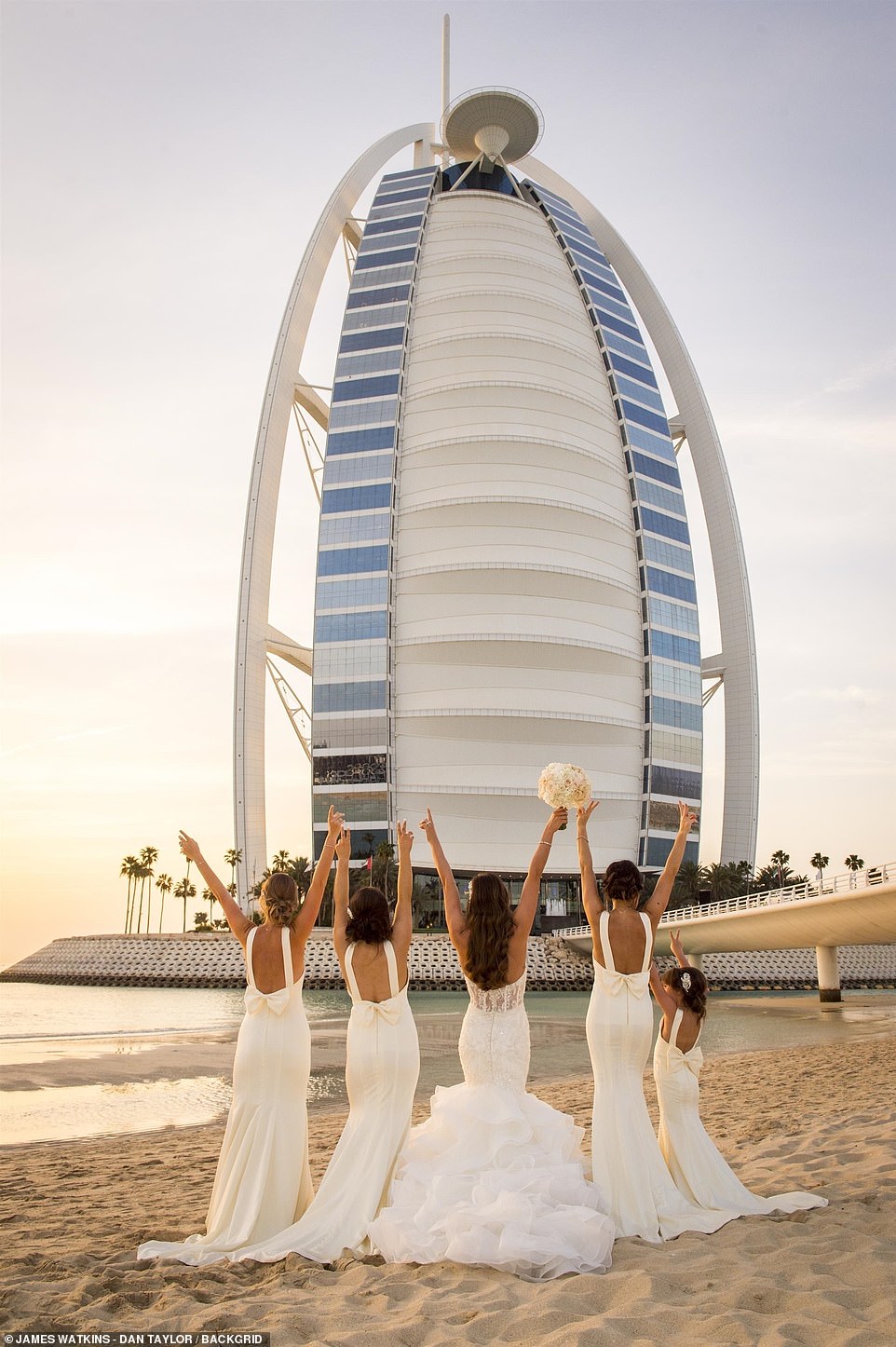 Peace out! Danielle opted for a white and cream theme to ensure the pictures were in perfect harmony 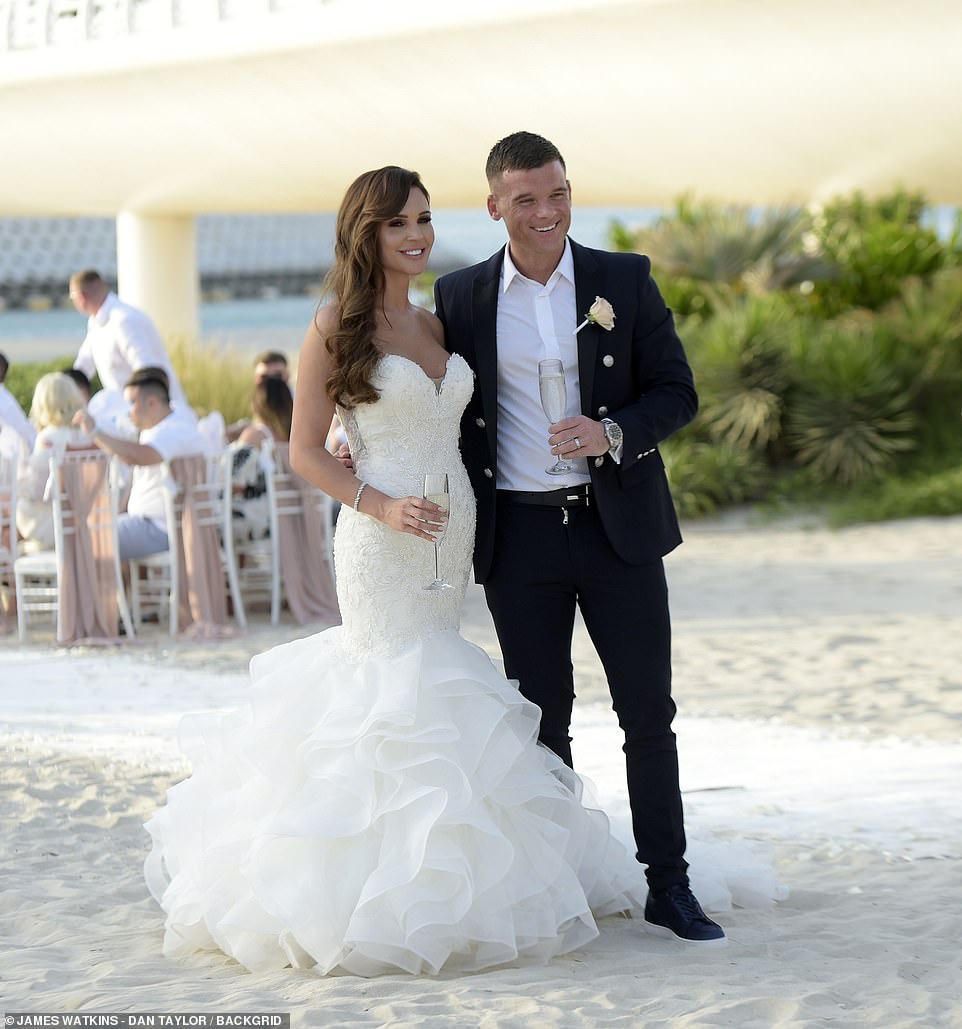 Glowing: She was looking sensational as she grabbed a drink with her new husband 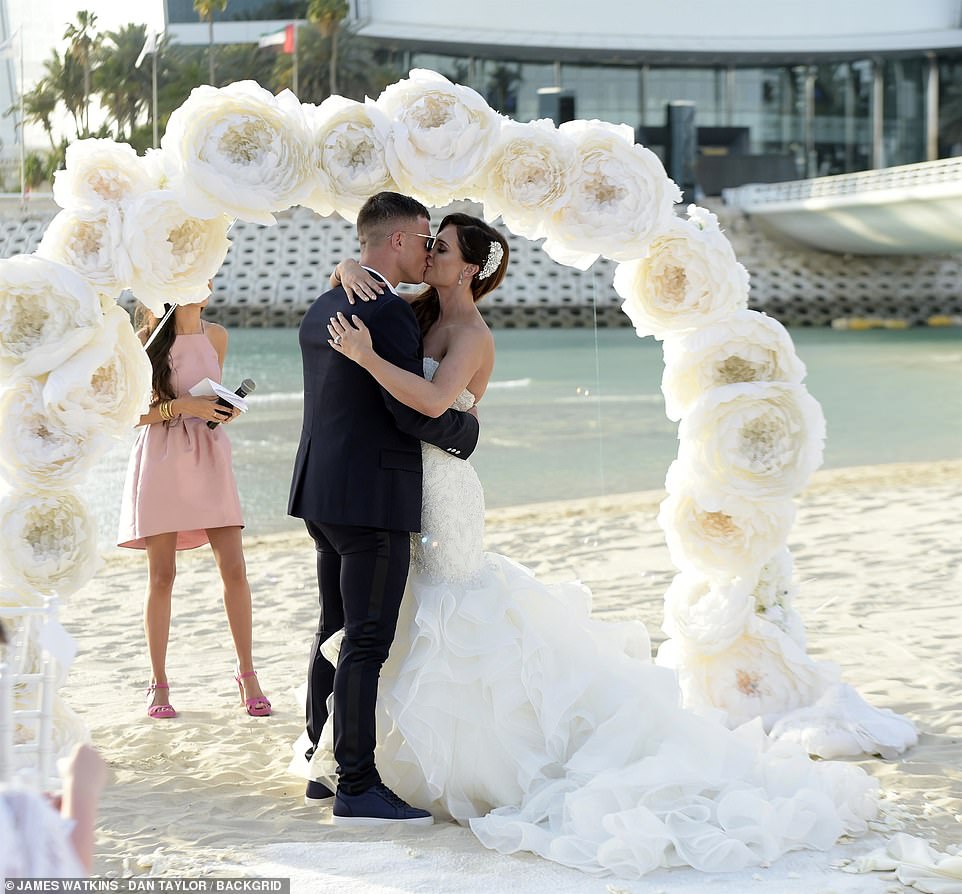 Sealed with a kiss: The ceremony wrapped up with an intimate moment between the newlyweds 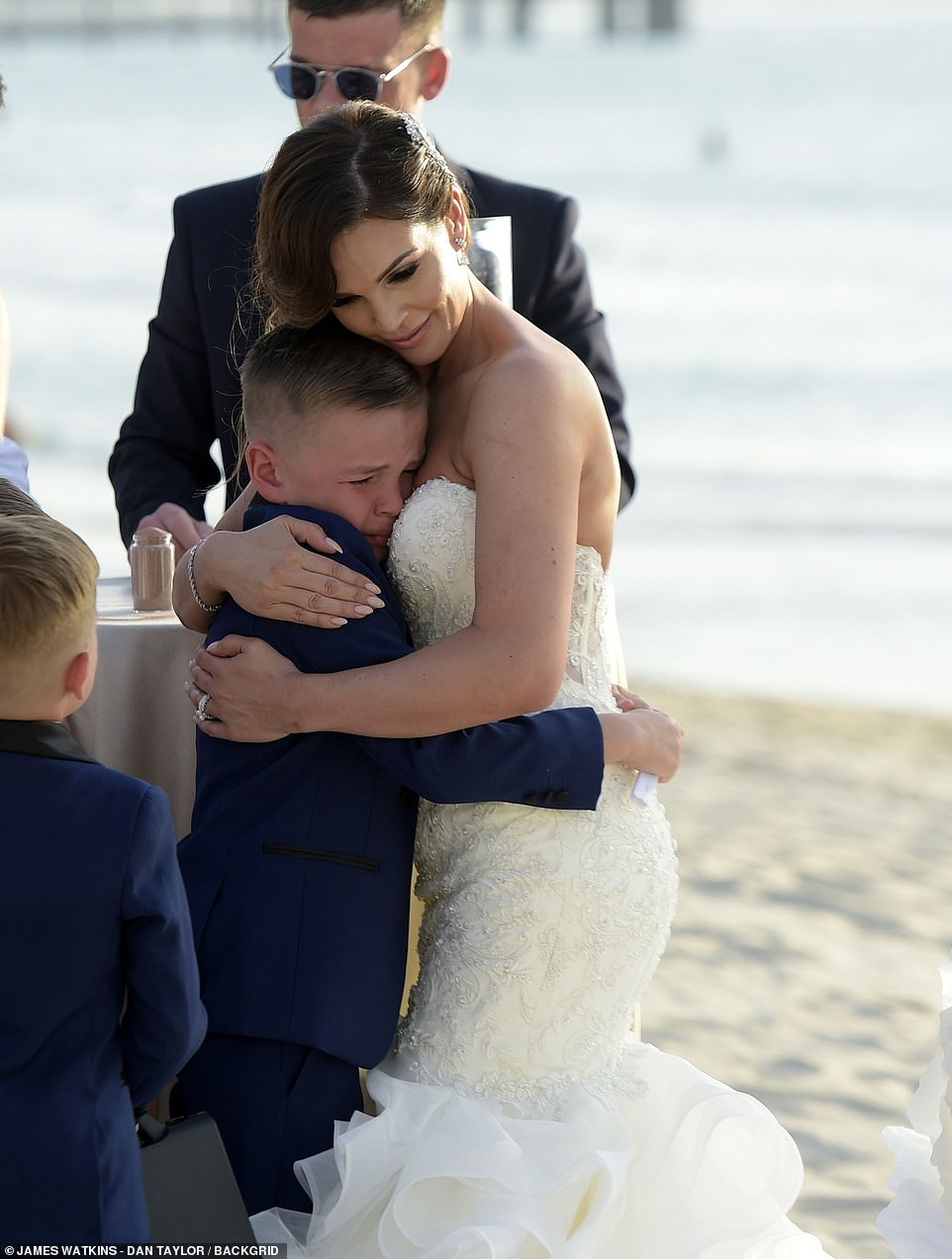 She was supported by her sons Archie, George and Harry James during the ceremony, with the boys acting as ring bearers, ushers and groomsmen in a sweet touch.

Following the ceremony, the drinks reception was held on the beach, as Danielle was seen clutching a glass of Champagne while ambling down the shore and looking incredible.

She posed with a host of her nearest and dearest during the reception, including her mum Jackie, who was also wearing white, and her incredibly handsome dad Arthur who walked her down the aisle.

Danielle remained coy about her wedding, yet new images of their big day show the sensational ceremony in all its glory. The building was washed in a red and white light, while candles could be spotted lining part of a sandy pathway, she later shared a fun picture of herself dancing with her guests. 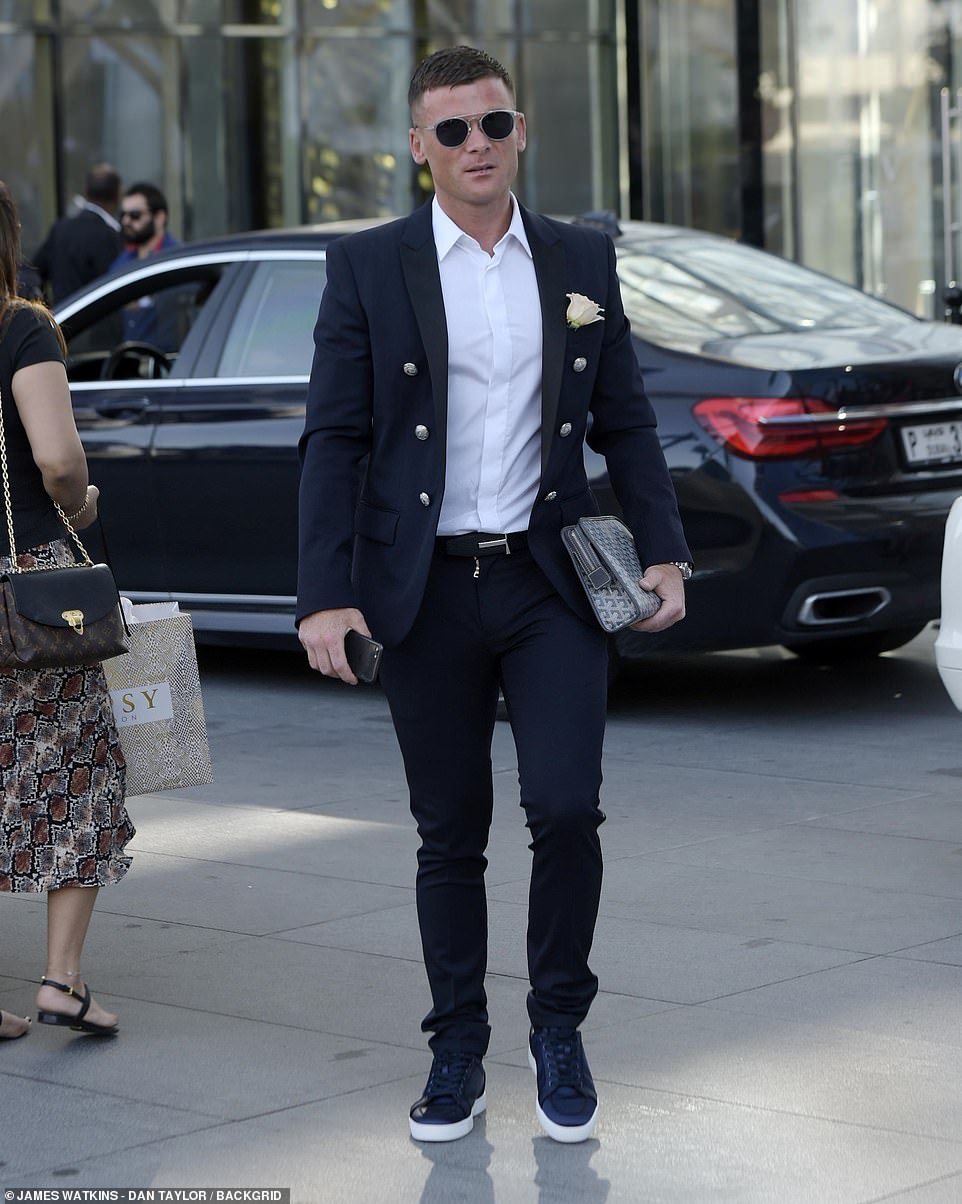 The big arrival: Michael held a Goyard clutch bag while arriving at the ceremony in style 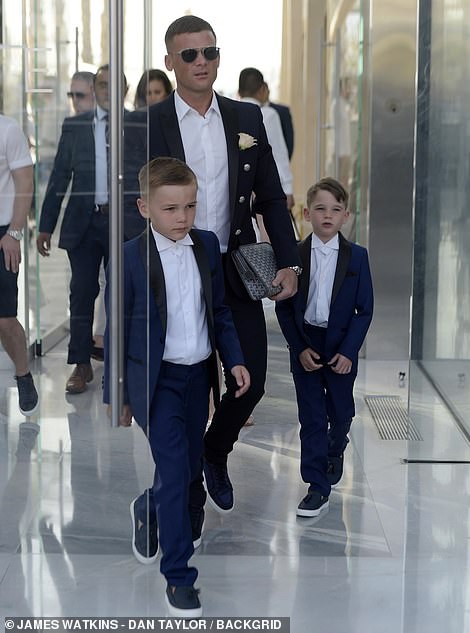 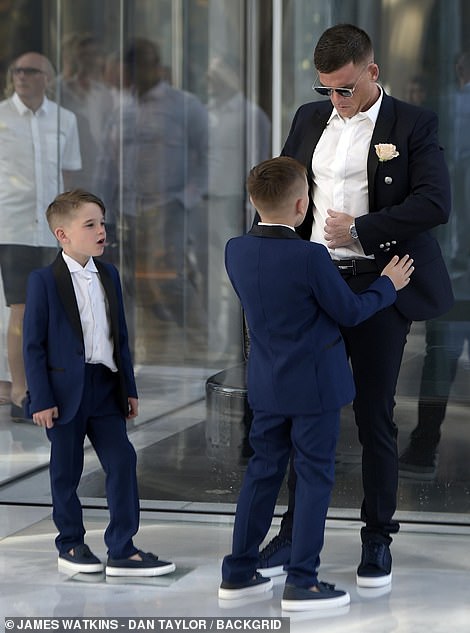 Here come the boys! Michael was helped by his step-sons ahead of the glam bash 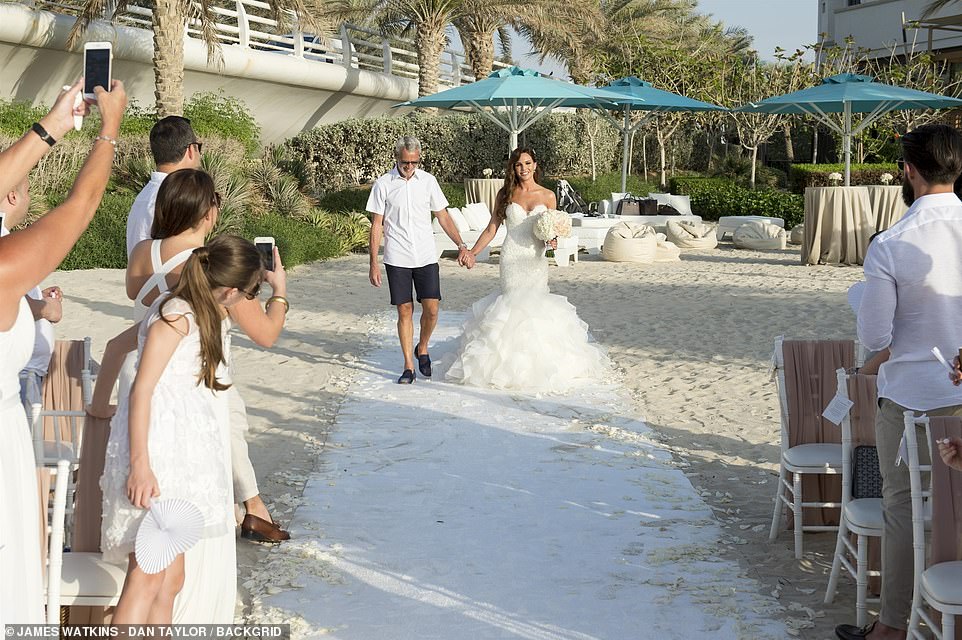 Daddy’s girl: Danielle walked down the aisle with her dad Arthur as they held hands and looked joyous 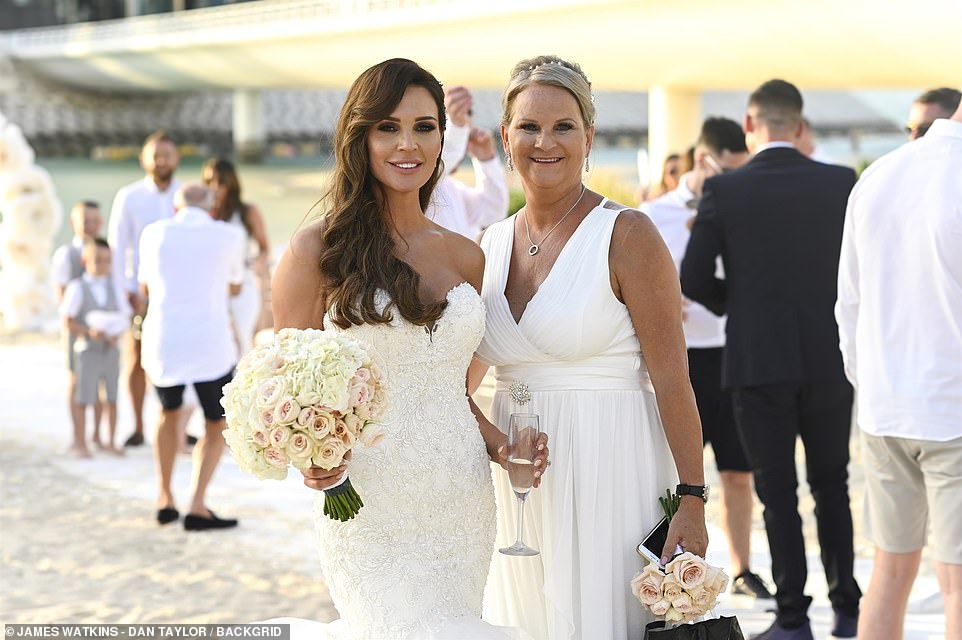 Proud mama: Danielle posed with her stunning mum Jackie, who was also clad in white for the stunning day 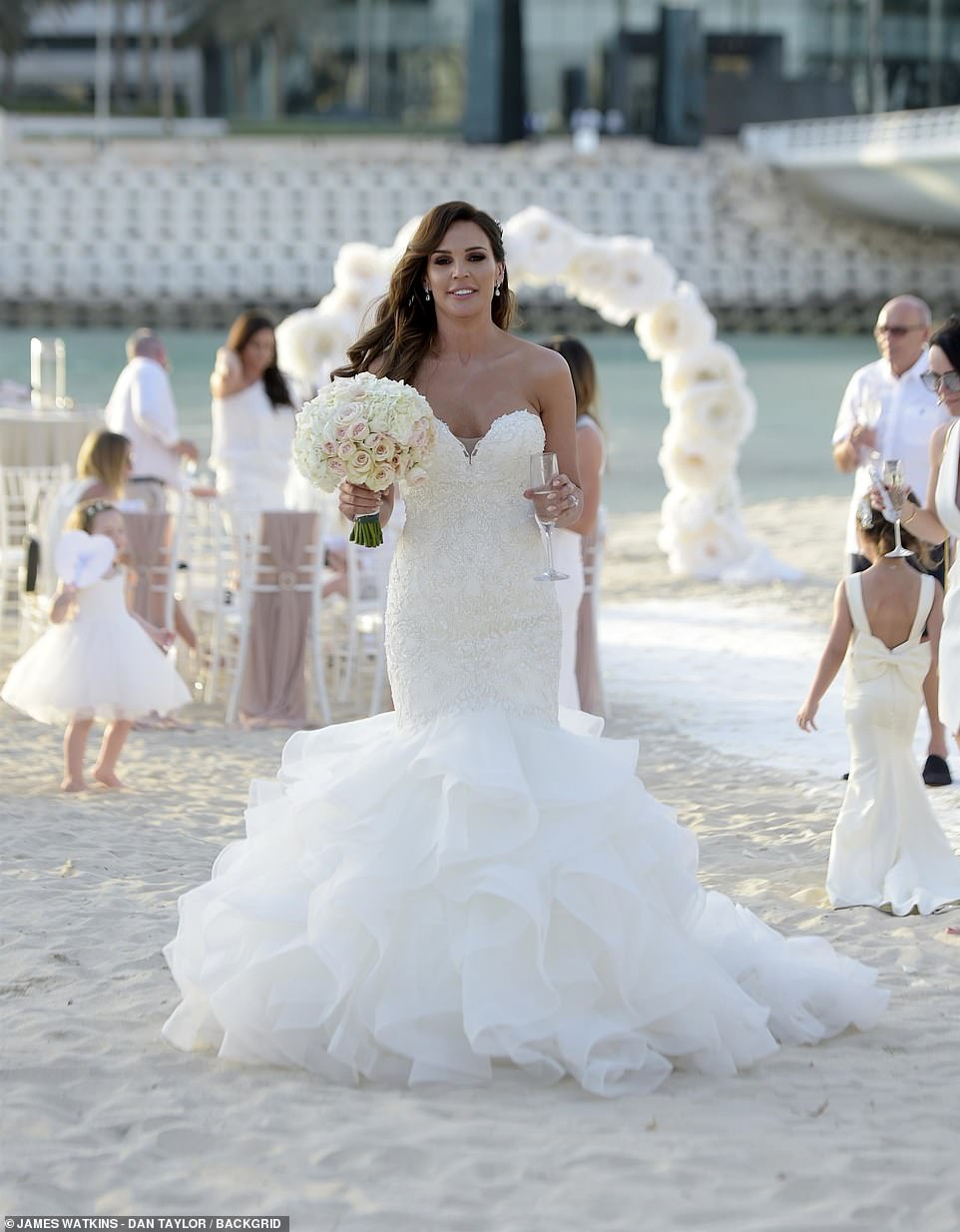 Drink up: Following the ceremony, the drinks reception was held on the beach, as Danielle was seen clutching a glass of Champagne while ambling down the shore and looking incredible 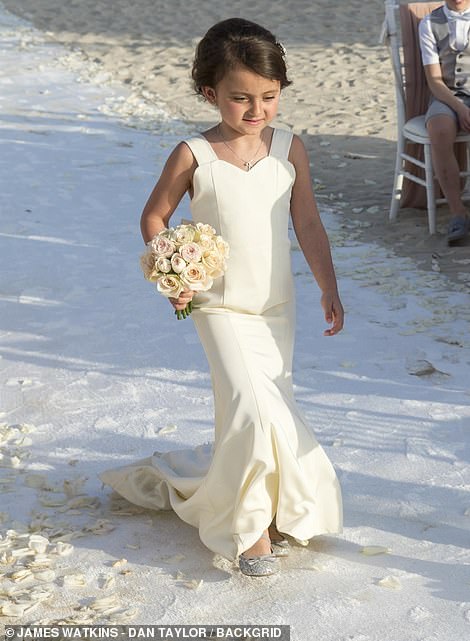 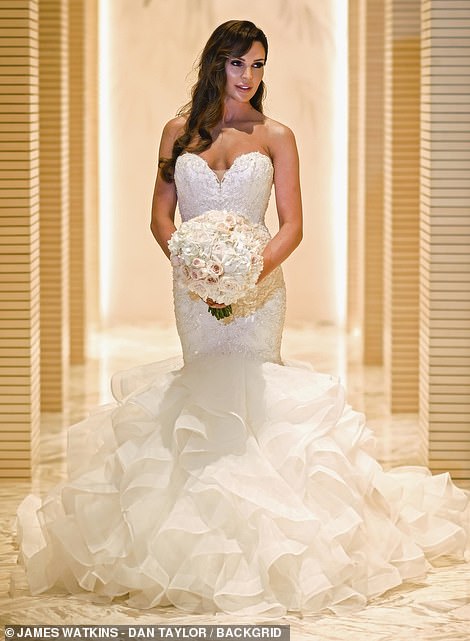 Let’s play copycat! Danielle was playing dress up with one of her bridesmaids, who was clad in a near identical gown 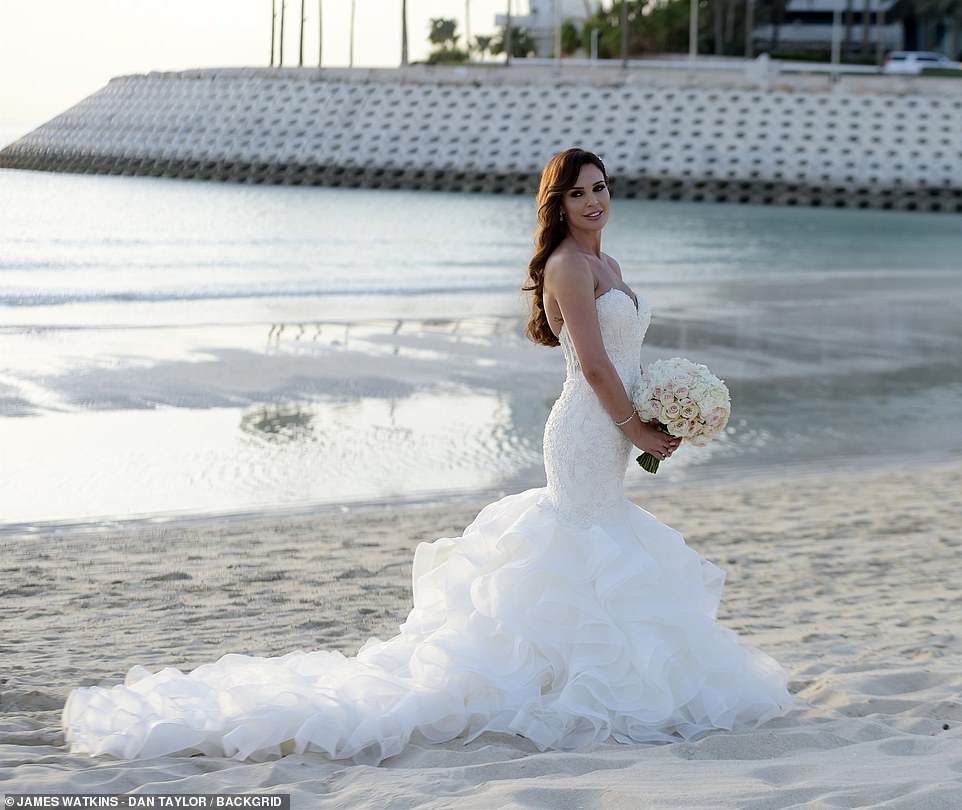 Look at me! The frothy dress’ boundless train helped make the look even more show-stopping 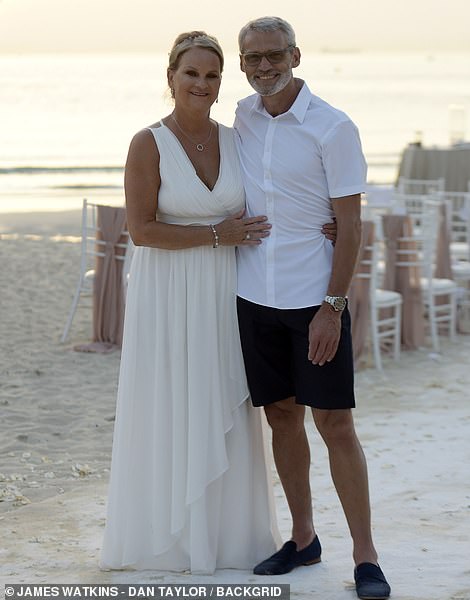 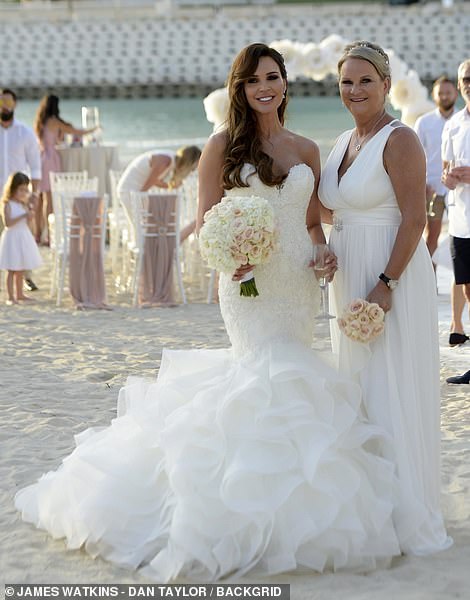